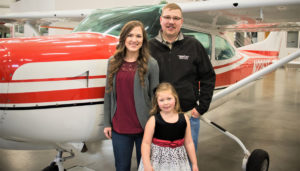 Dary serves as the Executive Director at MATA. He grew up in Senegal, Africa, as a missionary kid. He returned to the United States in 2000 after completing high school and started training at MATA in 2001. By 2005, he had earned his commercial and instrument licenses, as well as his Airframe and Powerplant mechanic certification. In 2006-2007, he joined the Army and suffered a severe combat injury in Iraq. Three weeks later, he married Anna and in 2010 they adopted their little bundle of joy, Kinza. Dary earned his CFI in March 2016 and later that year was appointed Executive Director of MATA.